This tutorial is intended to folks who are new to world of Linux. Like Command prompt in Windows, Linux have terminal where you can enter commands for your basic to advanced task. Terminal in Linux is very powerful tool. In this article we will be discussing some very basic commands and then forming a shell script with those commands.

You can open up Terminal from menu of your Linux Disrto. You can press Alt+F2 and type gnome-terminal to open up terminal. Now we will discuss some of the commands one by one.

cd <dir name> This command is used for changing the directory.

mkdir <dir name> This command is used for creating a directory

ls To list the file and directories inside a directory.

echo Hi This command will print Hi on terminal.

These are some of basic commands which you will need to get started. There are a lot of many more commands which we come across while moving ahead with Linux. That we will discuss when we come around. Now we will move toward writing a script. A script is basically a file in which all commands are stored. It can reduce your effort of typing same commands again and again if you have to do same task lot many times. But if we talk about actual power of script it is far more powerful than above mentioned. It can perform looping, decision making and much more.

In this article we are discussing script as a basic bunch of commands. In forthcoming articles we will discuss more aspects of shell programming. Lets start. Open up terminal. Type

and enter following commands. Instead of vi you can use your favorite text editor.

After entering all the commands press Esc and :wq to save and quit from vi. After creating shell script we need to change its permissions to make it executable. For doing so type

on terminal. Now we can execute this script by typing its path on terminal. If you are currently in the same directory where the script is, then type

to execute the script. If everything goes as mentioned here you should be presented with following output on terminal. 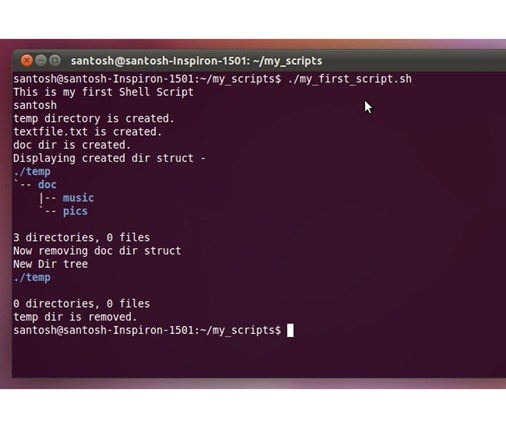 I have already explained much of the commands used in this script. In second line $USER is a system variable. The command echo is printing value of the variable. We can also use variables in our scripts. Variable names are preceded by $. The commandtree presents directory structure in tree form. Note that tree command may not be available as default in some distributions of Linux. All other commands used in script are already explained.